Straight from the Heart (I) : The Story of My Tryst With My Heart Ailment – I of VII

Straight from the Heart :
The Story of My Tryst With My Heart Ailment

Take care of your body.
It's the only place you have to live.
(But, did I care?)

I deservedly paid for being an immoderate smoker by having angioplasty done on me, with one stent, at Lilavati Hospital, Mumbai in December 1999. I haven’t smoked since, have stuck to reasonably healthy habits, and have been on prescribed life-long medication, including that for diabetes type-2, which actually erupted in December 1999 only, as earlier tests had shown normal glucose levels.

I have been used to walking for about an hour daily in the evening. In the latter-half of June 2014 I began to experience breathlessness while walking, although I didn’t feel any pain in the chest or elsewhere, or any palpitations, like I had felt in December 1999.

I visited Sanchaiti Hospital, Kandivali-E on 24 June 2014 and consulted my doctor, Dr Sejao Vidyasindhu. Dr Sejao, to my consternation, took no time in declaring what I was experiencing was “Angina-equivalent”, and that I must lose no time in getting ECG, 2D-Echo and Angiography (CAG) done; and till that is done I must forget about walks, do no exertions and take complete rest. He suggested the name of Dr Sunil Wani at Kokilaben Dhirubhai Ambani Hospital (KDAH), Mumbai.

The heart
How cruel and unjust of nature
To entrust the seat of mind and soul
To a lowly pump that tends to fail
Unpredictably, erasing all!
(Source : web)

I consulted Dr Wani on 26 June 2014 at KDAH, and also had ECG and 2D-Echo done. Based on the tests, Dr Wani advised I undergo angiography (CAG).
I underwent angiography on 3 July 2014 at KDAH. It revealed five major blockages (80% to 100%), including the one where the stent was put in 1999 (100% blockage). Dr Wani ruled out Angioplasty and advised expeditious Open-Heart Surgery.

A cheerful heart is the best medicine of all
—provided it beats cheerfully!

After checking up all the relevant facts from KDAH, on the internet and from Dr Wani, and personally meeting beating-heart-surgery expert Dr Vidyadhar Lad and discussing with him, we (my wife, two daughters and myself) decided at KDAH itself on 3 July 2014, before leaving for home after angiography, to entrust my fate to the deft hands of Dr Lad. 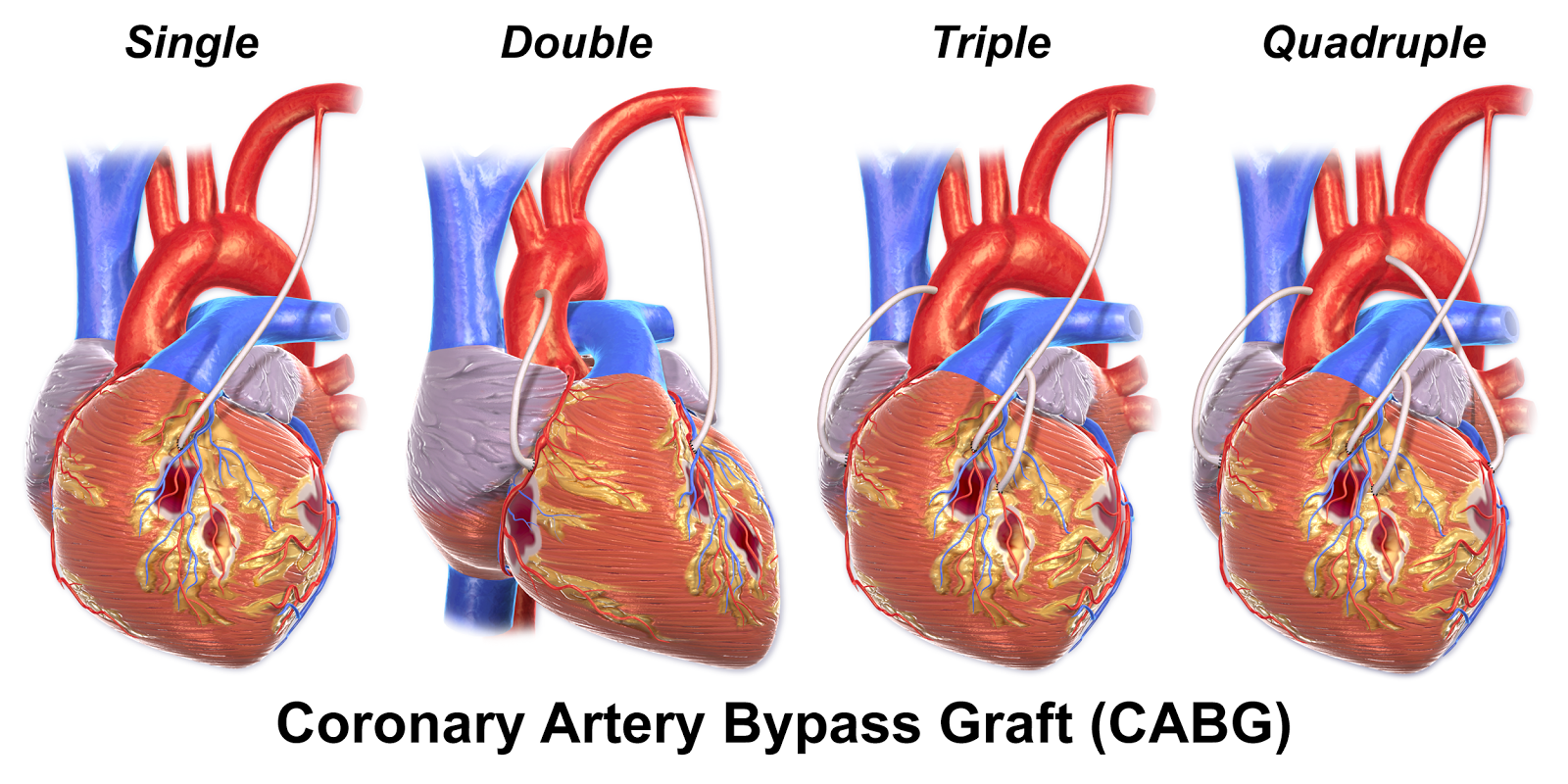 I had one more, that is, quintuple grafts—total five.

Beating heart bypass surgery is, in simple terms, a bypass surgery that is performed on the heart while it is beating. The heart would not be stopped during surgery. A heart-lung machine would NOT be needed. The heart and lungs would continue to perform during the surgery.

As opposed to the conventional On-Pump surgery, Off-Pump Beating-Heart surgery has been proven to reduce side effects, because heart function is better preserved if the heart is not stopped during an operation. The conventional On-Pump surgery also carries the high-risk of heart not being able to bounce back after surgery. Off-Pump Beating-Heart surgery uses special devices to stabilize the part of the heart the surgeon is operating on.

In summary, the benefits of the Off-Pump Beating-Heart surgery over the traditional/conventional On-Pump bypass surgery are quicker recovery resulting also in lesser hospital stay; reduced risk of neurological injury like stroke, memory-damage, and lesser risk of complications in heart rhythm, kidney, or liver;  better preservation of heart function; and superior survival rate. 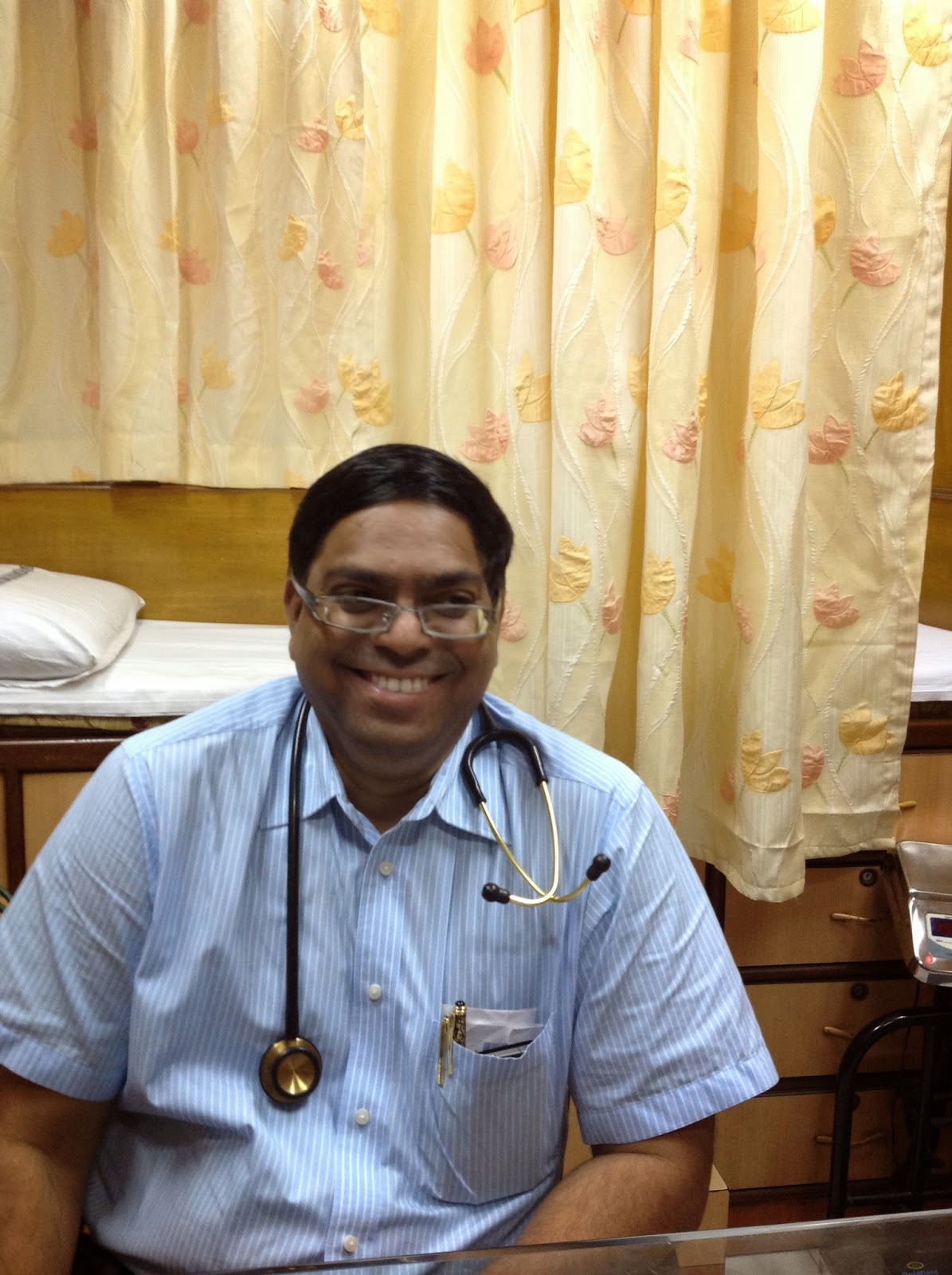 A no nonsense thorough professional who always offers the right advice. Exercising economy of words, he doesn’t talk much, but doesn’t mince his words either.

His cryptic declaration of the state of my heart and the immediate-next-steps-advice left me no room to fool myself that “things might not be all that bad” and provided me no scope “to further kick the tin down the road” buying more time, hoping, God willing, things might turn out okay even otherwise.

We need more such doctors. 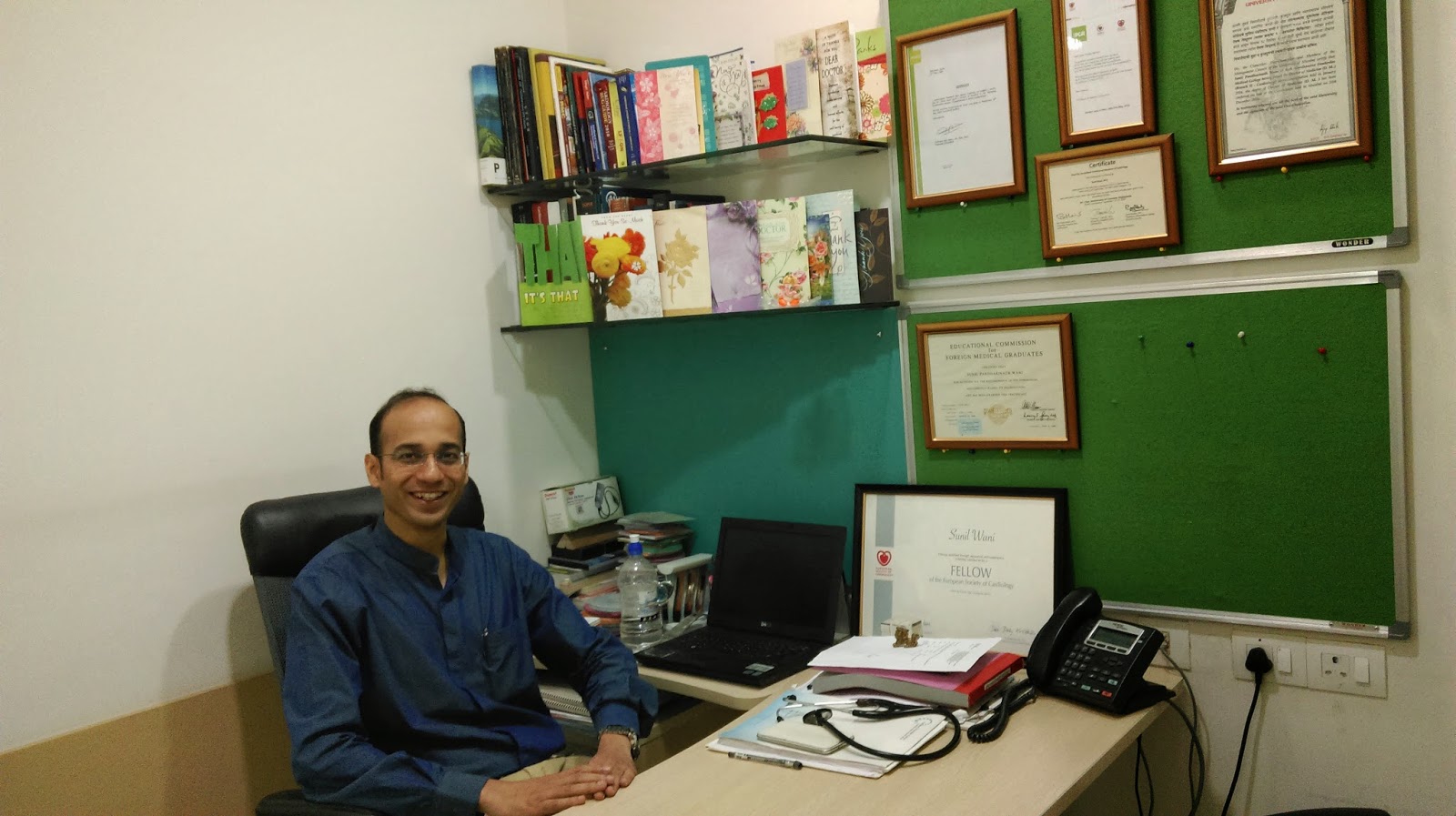 Dr Sejao had advised I get Coronary AngioGraphy (CAG) done at the earliest at some really well-equipped centre through a cardiologist of proven competence, honesty and integrity. He suggested, as top option, Dr Sunil Wani at Kokilaben Dhirubhai Ambani Hospital (KDAH), Mumbai, and gave me his mobile number. Knowing Dr Sejao as a thoroughly competent professional of high integrity, I did as he advised, and am glad for it.

I was worried it was going to be a huge hassle, but realising it couldn’t be helped, I sent an SMS to Dr Wani, to start with, before embarking on the ordeal.

But, most unexpectedly, with Dr Wani responding promptly and taking personal interest, the whole process—consultation, ECG, 2D Echo, followed later by angiography (CAG) on 3 July 2014—went so smooth and in such a hassle-free way that I couldn’t believe India, at least in such isolated pockets, had so dramatically changed for the better!

Angiography, which was (and is) done in the absence of any anaesthesia, allowed me to experience, observe and feel (the pain too) what was happening. Catheter inserted through a hole made in the artery of my right-hand wrist (generally the first and the preferred less painful option) didn’t quite work on account of the possible cramps on its path up. As an alternative, a hole in the groin (femoral artery or vein) was  made for the catheter. That procedure succeeded.

There was pain, but Dr Wani and his team executed the procedures very competently causing minimal discomfort.

I felt immensely happy and relieved I had opted to have the CAG done by Dr Wani. Many, many thanks to Dr Wani and his team. 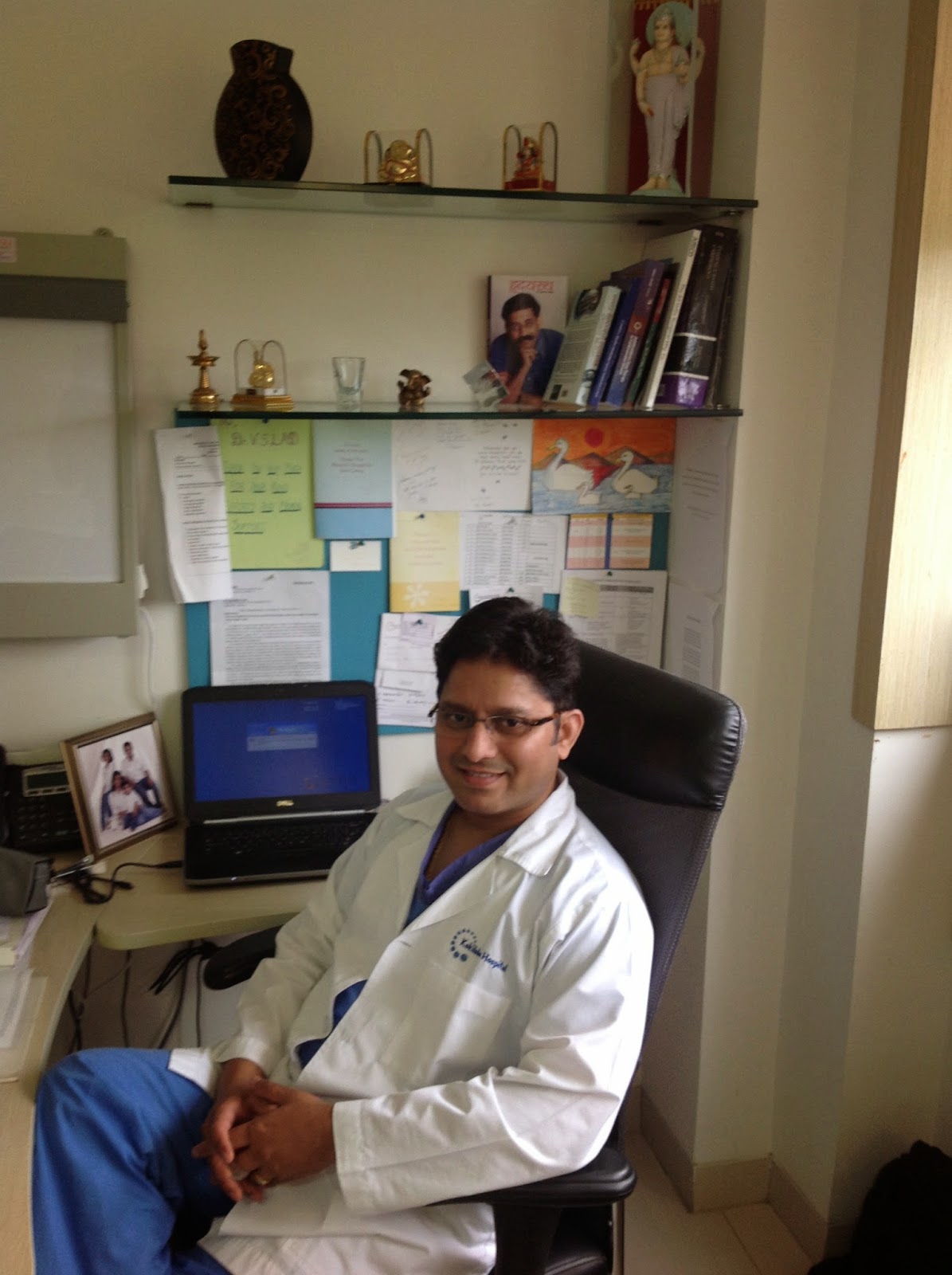 I am at a loss of words to adequately articulate the exceptionally high-level of competence and skill in their craft; the genuine, empathetic care and caution; and the endearing, humbling courtesy amply shown in practice by Dr Vidyadhar Lad and his team that ensured a smooth, hundred-percent success to the difficult Beating-Heart, Off-Pump, Coronary Artery Bypass Graft (OP-CABG) Surgery involving five grafts on me on Wednesday, 9 July 2014. What is more, besides the fact that there were NO adverse side-effects, the procedure caused minimal pain and discomfort, and led to double-quick recovery!

No amount of thanks are enough for Dr Lad and his team.

There would be much more on Dr Lad, Dr Wani and their team in the subsequent parts of this blog. 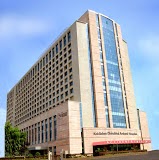 In my humble opinion, KDAH would count as the best hospital in Mumbai. It is superbly-equipped and has doctors of very high calibre. Its staff is well-skilled and competent and its management is excellent. It is unusually spacious, with wide corridors and high ceiling, and is fully air-conditioned. Its wards, including the twin-sharing ones, are roomy, airy and well-lighted, with extra-wide glass windows. The most notable thing about the hospital, something I really appreciate,  is its cleanliness. It is conspicuously spic-and-span. Overall, the hospital has uniquely positive, life-enhancing ambience.

Compared to the high-quality of services offered by KDAH, its cost of treatment is very reasonable.

The many others I am highly thankful to

I acknowledge with deep sense of gratitude the excellent services and help provided by the following:

Thanks also to those at the ICU and at the ward who took good care of me, including:
Dr Shruthi

And, of course, many, many others.

My elder daughter Manasi working at  Oracle, Hyderabad, and my younger daughter Manini, director in a German software company, flew in from Hyderabad and Munich respectively, leaving all their work, and proved to be of great help to my wife Debu in managing all logistics and keeping me amused. My son-in-law, Arun, also came in from Hyderabad to help out, as also my sister, Poornima Patil, who came over from Nagpur, and my elder brother, Shrikant Puranik, who came over from Bhopal.

I am thankful to many who visited and/or phoned and enquired and wished me quick recovery. 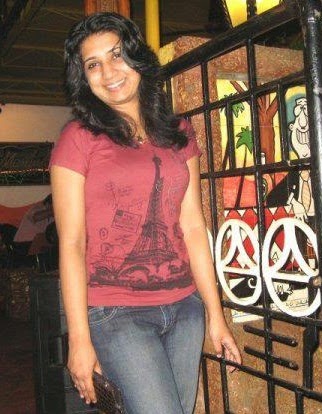 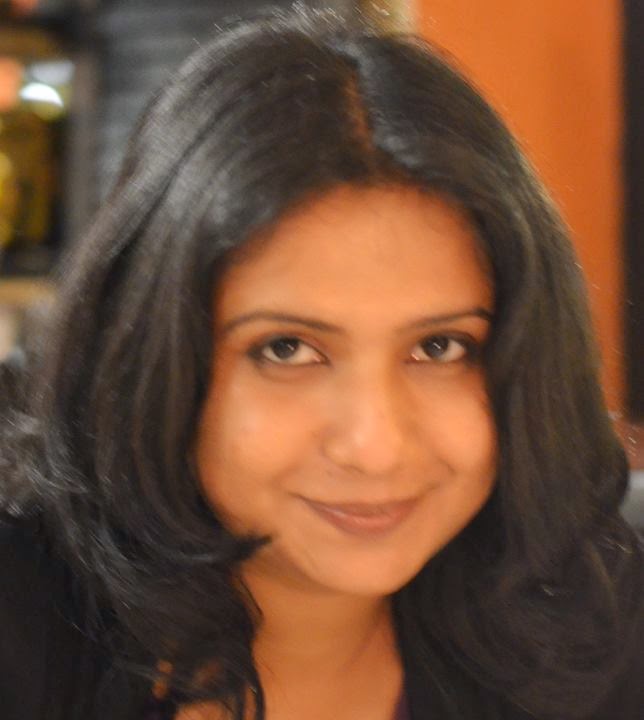 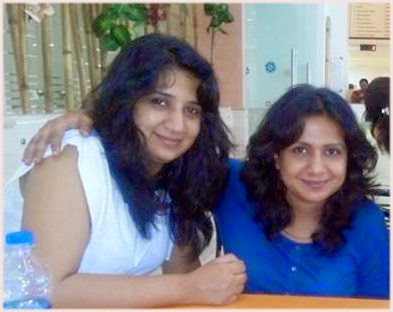 Manasi and Manini at the Hospital: KDAH 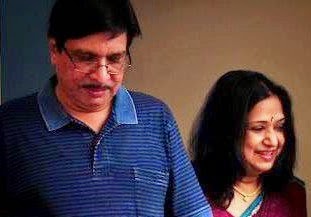 With my wife Debu

Subsequent Parts of this Blog-post

Interesting episodes, our arrogance of being rational while indulging in irrational acts in practice, particularly in health matters, what it is like to be at the receiving-end of the invasive procedures and surgery—angiography, angioplasty and open-heart surgery, all of which I have had the “good” fortune to experience—and interactions with the other participants in the real story of my heart would be subjects of the subsequent parts of this blog-post.

It is amusing how the experience at KDAH stands in sharp contrast to the otherwise third-rate and sub-standard infra-structure, services and facilities that Indians have the misfortune to be condemned to since independence thanks to the poverty-perpetuating and misery-multiplying Socialistic-Nehruvian-Bureaucratic-Babugiri-Dynastic claptrap—but for which India would have been a first-world country by 1980 (had it followed competitive capitalism and free-market economy). Our latest records of the Dynacracy, that is, Dynastic Democracy: one-third of the world’s poor live in India; and India is the open-defecation capital of the world!

Now that the Dynasty has hopefully been consigned to the dustbin of history, and with Narendra Modi at the helm, hopefully things would change for the better, and there would be many more pockets and segments emulating the spirit of excellence à la KDAH.

I am tempted to quote from my book, “Foundations of Misery, Part-I: India, 1947-64” detailing the “Blunders of the Nehruvian Era” that still afflict us.

“Many countries, including those in SE Asia, which were nowhere near India or were much behind India at the time India got independence have marched far ahead of India. When you look at their airports, their roads, their metros, their city-buses, their well laid-out cities, their infra-structure, their cleanliness, their everything, you wonder why you have remained a country of crumbling roads, overcrowded locals, overhanging scary ugly mess of mesh of electrical, TV and internet cables blotting the skyline and brutally assaulting even the “chalta hai” sense of terribly intolerable tolerance of the “have given up” generations; a country of absent pavements or encroached pavements or pavements that stink from the use they are not meant for, and where mercifully for the walkers this is not so, they are but patches of broken down pavers, punctuated by uncovered, or partially covered, or precariously or deceptively covered man-holes, awaiting their catch; a nation of stinking slums and impoverished villages, open drains and sewers, rotting garbage, squalor and stink all around, children and men defecating by the road-side—all testimony to criminal absence of the very basics of being civilised...

Most of the Indian towns, cities and metros are dirty, foul smelling and hideous. They look like a defacement of spaces and a blot on the landscape. Cities in the West, SE-Asia, China and elsewhere get better, cleaner, smarter and spiffier year after year, while ours get worse, more congested, more difficult to live in and more squalid.

How's it that we got so left behind? What is it that we did, or did not do, after independence, that everything is so abysmal and pathetic? Why an overwhelming majority in India is condemned to continue in abysmal misery? What are the foundations of this misery?

And all this unmitigated misery despite the overwhelming advantage of India as a nation with first-rate people,  plentiful natural resources, relatively better position in all fields—infrastructure, trained manpower, bureaucracy, army—at the time of independence compared to all other nations who have since overtaken us, grand civilisational heritage, rich culture and languages, and unmatched ethical and spiritual traditions.

Why did we fail to leverage such rich assets of a gifted country?

Posted by Rajnikant Puranik at 00:52